Presented at the ‘Rally Against Arts Funding Cuts: Culture Counts‘ at Parliament House steps on 19 April 2016. 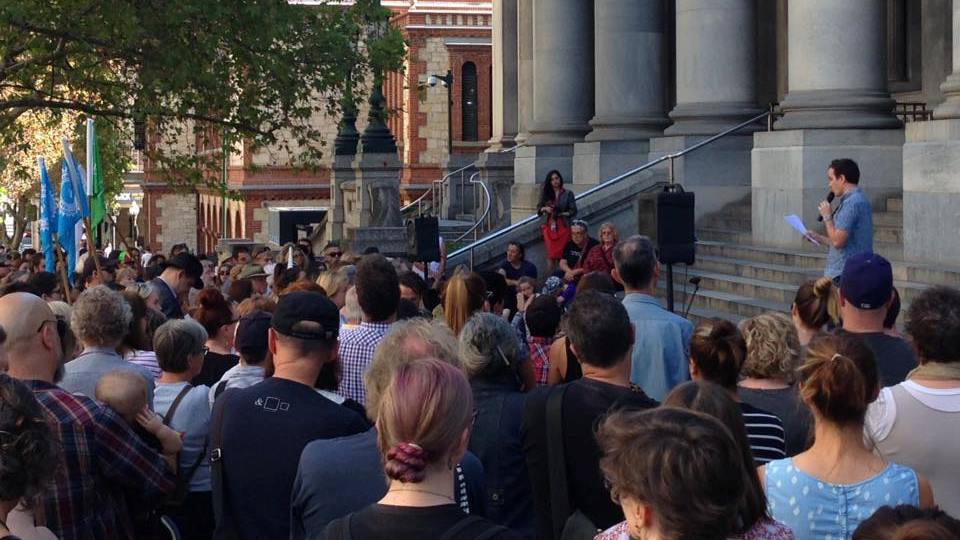 We are all here because we passionately believe in South Australia as a state of cultural significance. You have heard from my peers about the catastrophic effects the proposed budget cuts will have on the South Australian arts sector following the brutal, poorly conceived, ideological attack on the Australia Council in last year’s federal budget. In my role at Nexus Arts I have already seen a steady decline in the confidence of the national arts industry and the impact that this has already had on arts projects across the nation including projects at Nexus. It was my hope that Adelaide and South Australia, a longstanding centre of culture, would meet these national changes with the strength, courage and the leadership necessary to re-double our support of the arts in light of the significant cultural and economic contribution they make to our great state. Unfortunately following the announcement of cuts made this year by arts minister Jack Snelling we now know this is unlikely to be the case. You don’t need to hear any more about the impact on organisations as my peers have said more than enough, so today I will speak to you about my perspective as an independent artist.

There is a question I ask myself reasonably often that I always know the answer to.

Why do I choose to live in Adelaide?

But when I really break this question down I realise it’s the people that live and work here who are the real reason I’ve stayed a passionate advocate for our city and our cultural contribution to the nation.

Over many years I’ve benefitted both directly and indirectly from the many many people who make up the cultural fabric of this state. I’ve benefitted from many generous people who have kindly given countless hours of their time to help me develop as an artist and arts worker. It goes without saying that I owe a significant debt of gratitude, and a significant amount of my success to the people who have been a champion of my creative practice and my development as an active member of our arts community. The people I cite here are people who live and work in South Australia across our many cultural institutions, festivals, organisations and creative practices. When thinking about what I would say today I asked myself the question; where I would be without even one of these wonderful people’s contribution to my development? Where I would be if they no longer worked in the arts or moved interstate because they couldn’t find the support they needed to stay in South Australia? The answer is that I would almost certainly not be here addressing you as a respected member of the South Australian arts industry if these people were not supported to undertake their work in this state. The combination of state and federal cuts mean that we will inevitably be living in a city with a smaller arts sector than we have currently and this will of course mean fewer jobs, less new work, and less support for artists. It will mean that many brilliant people are forced to look elsewhere for work and that will mean other sectors and other states. This will be happen across the board but these cuts will be felt acutely by the emerging artists and arts workers who will be forced to seek work in other states contributing to the already significant brain drain we experience in South Australia. The cultural deficit will be felt for generations and even restoring the funding, won’t fix the problem when state’s cultural leaders don’t live here anymore. We’ve heard the term arts ecology a lot over the past year and I think Timothy Sexton said it better than I when he said recently.

It’s a truism we all know instinctively and the presence of all of you here today affirms it beyond question. I’d add that that the interplay between these companies and independent artists is also one of the major factors that has defined South Australia’s success as an arts state and if supported adequately can help to define it into the future. But unfortunately it seems that on many levels of government the true cost of both Federal and potential state funding cuts are not fully understood.

When it comes down to a question of that magnitude we’re forced to fully understand the seriousness of this discussion. Terms like efficiency dividends, convenient as they are for the those charged with turning our struggling economy around, do us no favours for without a view to the future prosperity of our state we’re simply starting in the wrong place. When we get to the heart of things what we are really asking is what type of city and what type of state do we want for ourselves, for our children and for those who visit us. It’s a choice between a city of the arts and a city of the arts one month a year. It’s a choice between a city where artists live and a city where artists are from. It’s a choice between a city where creative expression is at the core of daily life and a city where creative expression is imported from elsewhere. For the young people of our state we are making a choice on their behalf as to whether they grow up as active participants in the arts simply as passive observers, for a city with no jobs in the arts and with no support for new work by the people of South Australia for the people of South Australia may as well not have cultural training institutions.

I like all of you here have spent my life rallying against the mediocrity these lyrics renounce so I know very well what my answer to these questions is. My question to Minister Snelling and the Government of South Australia is, do you?